Thriftigo is our own startup and its mission is to show the world that clothes deserve a second chance. The goal of this project was to develop beautiful mobile apps for anybody who is interested in thrift shopping. 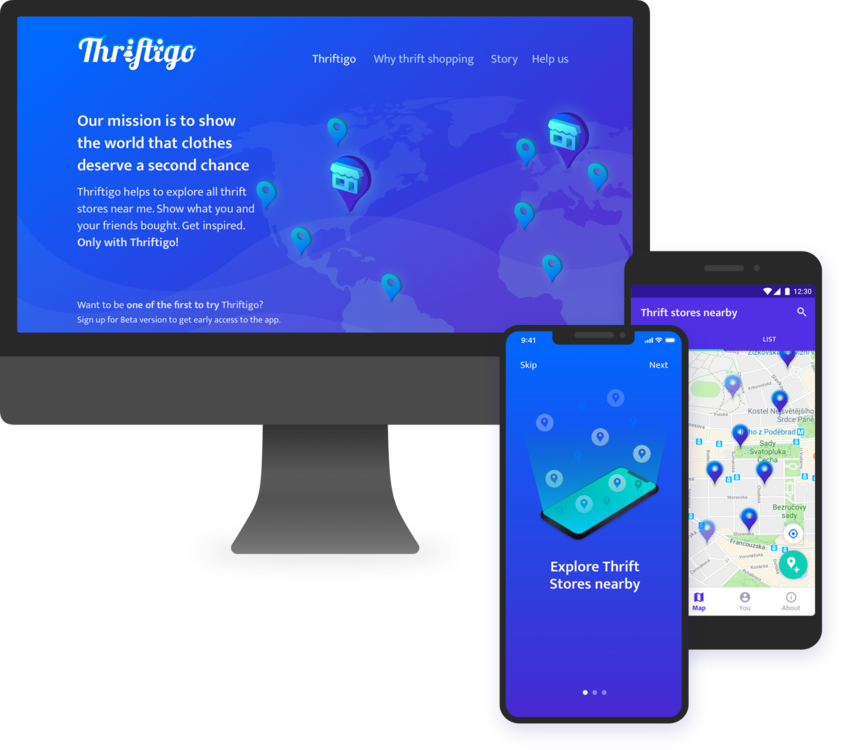 Thrift stores, charity shops and second hand stores are present everywhere around us and it doesn't matter if you are in Prague or San Francisco - you can explore thrift stores near you almost everywhere, have fun when thrifting and buy awesome stuff. Thriftigo helps you to explore or search for all the thrift stores nearby, post your shopping hauls and get inspired every day.

The solution consists of beautifully crafted native mobile apps for Android and iOS which show all thrift stores nearby on a map or in a list with various details, ratings and shopping hauls which is a content generated by users. Thriftigo has backend with API for mobile apps and administration, and beautiful landing page as well.

The apps were designed to be beautiful and with pleasant animations. Applications are also having a lots of custom graphics and icons. We designed the whole Thriftigo’s identity including logo as well.

The apps are using your location to show all thrift stores near you with information about distance, address and opening hours. But even without the location, you can search for any second hand store by its name.

The users post their shopping hauls into the app and they can appreciate each other with likes. You can get inspired everyday from other thrifter’s shopping hauls.

The apps, whole Thriftigo’s mission and why we build this project is presented on a beautiful landing page with a lots of animations.

The design is a soul of an app and with a clear idea about user experience of the application, we can focus on this next task. Being based on a thoughtful UX, the design defines if the application is accepted or rejected by its target group.

Thriftigo apps have a beautiful colorful design full of animations, custom icons and illustrations. We have also put a lot of love into the tutorial section within the app to showcase what the users can do within the mobile application. We designed the whole identity of brand as well.

When all pieces are prepared on a table, the final step can start. The programming will convert the idea into the actual product.

Backend is developed in Ruby on Rails utilising the MVC architectural pattern. Native mobile apps for iOS and Android are developed using MVVM in Swift and Kotlin. Mobile apps are communicating with the backend through API and save the data into their local databases which are periodically synchronized with the current state of data (e.g. stores) on the backend.

The result is a minimum viable product (MVP) which is now being used by users in 13 countries. Users from other countries can register for beta testing program on Thriftigo landing page (www.thriftigo.com) and get later access to beautiful Thriftigo mobile apps we developed for iOS and Android.

Our team is filling new second hand stores to our backend via admin every day and these stores are then immediately downloaded to mobile apps and shown on a map or in a list. Stores can be suggested by anybody through the mobile app or via the form on Thriftigo landing page.

Thriftigo mobile apps were launched in Q1 of 2019.

I want a similar app! Signslate
Back to Top